Out of the Jungle, and into Paradise

The bus rumbled along the long coastal road, dodging people, food carts, and all manner of street obstacles with a certain mastery that I could only wish to aspire to.  Most of the people on the bus were headed to the distant desert peninsula of the Colombian coast, La Guajira, but I had other plans.

I had claimed the seat I now had in the back of the bus when at the bus station in Santa Marta.  My destination for the day was Tayrona National Park, a beautiful natural park on the beach whose photo was displayed on the front of my Lonely Planet guidebook, and a place my mind had been set on visiting since I first started planning my trip to Colombia.

After arriving to the Santa Marta terminal via a night bus from San Gil, and waving goodbye to the German friends I had made, I had chosen the option of hopping on the first bus headed in the direction towards Tayrona.  I would just have to hop off when I needed to.  I was now silently cursing the 12,000 peso cost of the ticket, thinking I could have taken a local bus into the city to get a cheaper ride to Tayrona.  I had to tell myself to relax though — in reality, it was only a few US dollars more expensive, and I would be saving time this way, or so I thought. Sometimes, I really just needed to let go of my extreme budget travel instincts and not worry so much in the hopes that everything would work out.

“Zaino,” I had insisted to the bus driver and his assistant, recalling the name of the entrance to the national park.  They looked at me with expressions I couldn’t categorize, and proceeded to repeat the word “Zaino, zaino…”  I could only hope they knew where I was talking about, but they reassured me they would stop there.

Now, my mind was zoning out as I stared through the bus window, taking in the passing landscape.  Rolling, arid hills changed into greener ones as the forests became more dense.  I imagined the Caribbean was hiding just behind all of the hills, waiting to be discovered.  I was zoning out enough that when the bus passed a sign reading El Zaino – Tayrona it took me a few seconds to register what I had just seen.

As soon as it registered, my mind clicked into gear. I jumped up out of my seat, hoisting the straps of my large backpack haphazardly over my shoulders while beginning to stumble down the aisle.  “Señor, mi parada!” Sir, my stop! I called out, struggling to make my way down the aisle while the bus continued to chug along, not slowing down.  The driver’s assistant simply stared questioningly as I made my way towards him and the door.  The motion of the bus and the twisting road threw me against the seats and sent first my water bottle, then my umbrella, flying out of the side pockets, making the process all the more difficult.

By the time I actually reached the end of the aisle, the driver finally slowed down to a spot, but there was no telling how far away from my original destination we were now.  I could only step off the bus, watch it disappear away from me, and face the journey in 90 degrees and humidity with determination, excitement, and a little bit of exhaustion, and hope it wasn’t going to be too far of a walk.

Little did I know that this was only the beginning of a very long hike.

The walk from where the bus dropped me off to the entrance of Tayrona itself took less time than I had anticipated.  It couldn’t have been more than half a kilometer, although the sweltering heat and the weight of my backpack made it more difficult.

After passing by the entrance and paying the fee*, a van appeared, and shuffled all of the waiting travelers inside before taking us into the jungle to, presumably, near the beach and where we wanted to be.

However, again, this was not to be: we were dropped off at the entrance to even more jungle, it appeared, and a map stating that to arrive to the part of the beach with backpacker accommodations and camping options, called Arrecifes, we had to follow the trail that led deeper into the jungle.  I could already feel my shoulders complaining, as I noticed the “4 km to Arrecifes”, but I remained positive and ventured onwards.

I found myself walking in the same direction as a Luxembourgian man and a British woman, both of whom were going to spend a few days on the beach in the park, like me.  “After working in London for 7 years, I felt that I needed a little bit of an adventure. And so here I am,” remarked the British woman.  Although unable to relate to the years of work, since I am still a student, I admired her for finally taking that step, putting herself out of her comfort zone, and following through with dreams of travel, which so many are unable to do.  And that is something I can always relate to.

The Luxembourgian man did not seem surprised by the fact that he was the first person from the tiny European country that either of us had met, but he happily shared the knowledge he had of Luxembourg, from all of its stereotypes, to what life is like there, to their very own language.

Conversation continued as we trudged along, with my participation stopping after awhile as I focused on each step.  While my two companions had nothing but small shoulder bags, I of course had all of my things, including the two water bottles I was holding in each hand.  Where even was all of their stuff?  “Oh I left my bag and the rest of my things at my hostel in Taganga,” said the British woman.  Why didn’t I think of that?  Oh yeah, because I didn’t have a hostel in Taganga as she did.  However, I liked the security of knowing I was in charge of all of my valuable items and what happened to them, because I had them with me.

Geckos scampered across the forest floor, with other larger lizards hiding out among the trees and silently watching us trespassers make our way through their habitat.  Vines wrapped themselves among the many branches and also around the wooden stairs that were built in certain sections of the trail, which made its way up, down, and then up yet another strenuous hill again.  The strong sunlight just barely made its way through the trees, but the humidity was always there.

After over an hour of hiking, I was getting a little antsy.  There was no way this trail was only 4 km, but maybe its distance was exaggerated in my mind thanks to the weight I was carrying on my back.  My hiking companions did not seem as concerned, so I assumed that that’s what it was.

Suddenly, the trees opened up to reveal a rocky outcropping, with a view of not only the ocean, but of the beach down below.  The gold sand stretched out into the distance, large boulders littering the beach, and palm trees marking where the jungle meets the beach.  The jungle rose up into lush mountains and hills which served as a backdrop to the beautiful beach.  It was breathtaking.  For a moment I forgot my exhaustion and impatience as I breathed in the salty air, and just took in this incredible view and landscape.  I grew hopeful that we really were, almost there.  But regardless, I felt so lucky and happy to be there. 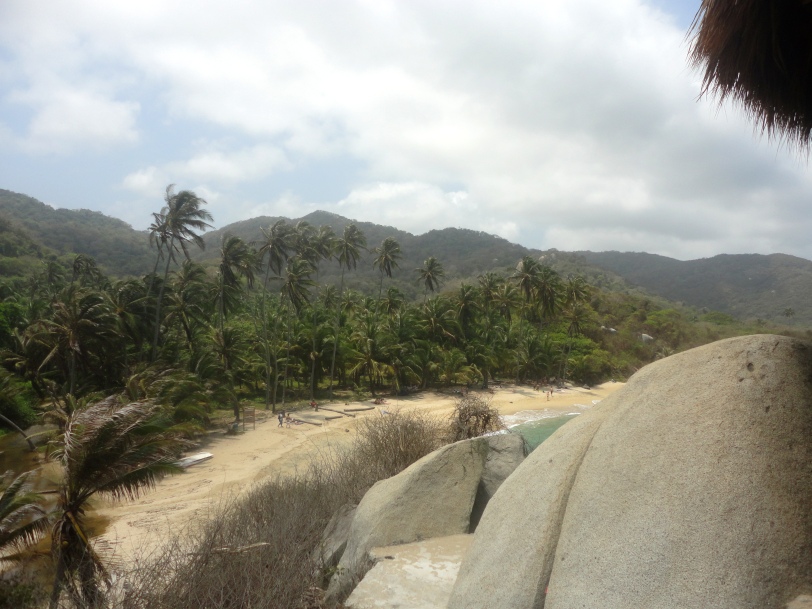 I pressed on, except with more determination this time.  The trail was less jungle-like now, and more of sand and palm trees and fallen coconuts.  Immediately after the outcropping, we passed a sign that read “Sendero Arrecifes – 70% recorrido”  (Arrecifes trail, 70% of the way there).  We had longer to go on the trail than I’d expected, but this confirmed that we were going to the right place, in the right direction, and that we would finally be there soon.

Sure enough, after another struggle of a walk, an opening in the trees appeared again in the distance.  It grew closer and closer, I could make out a sign which read Arrecifes.  No percentage, or indication of more trail.  Just Arrecifes.  A glorious sight, indeed. 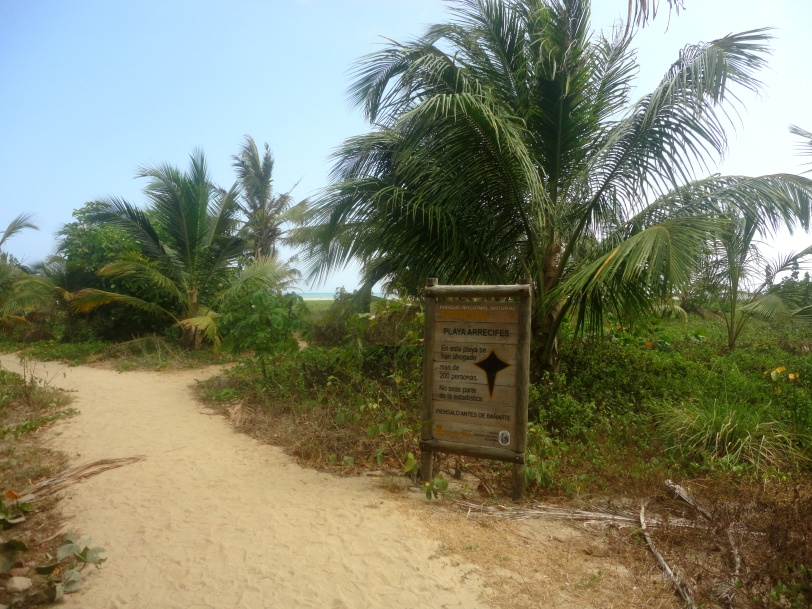 My pace quickened as I made my way out of the jungle and into the campground.  Just beyond the palms surrounding the area, I could make out the sand and the waves, devoid of any people. 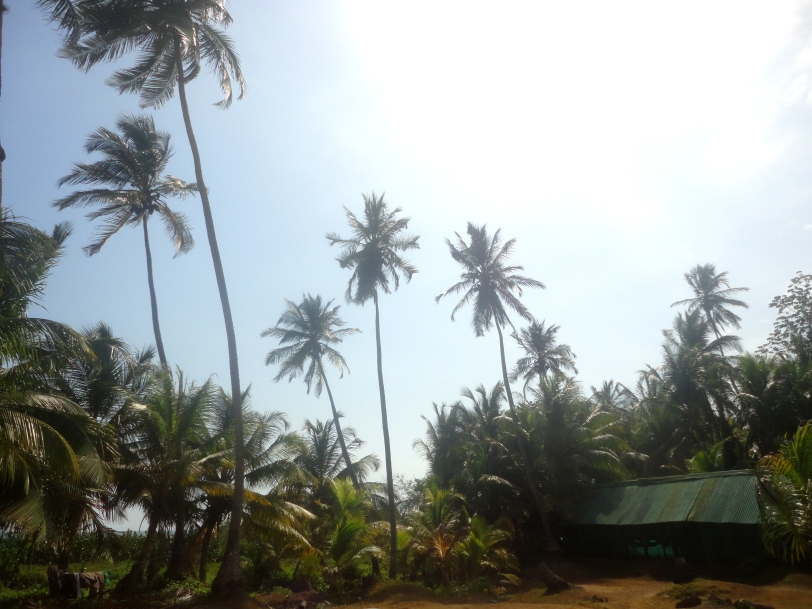 The tall palm trees swayed in the breeze beneath the sun, and also beneath the looming green mountains behind, covered in the dense forests and whose tops reached the clouds. 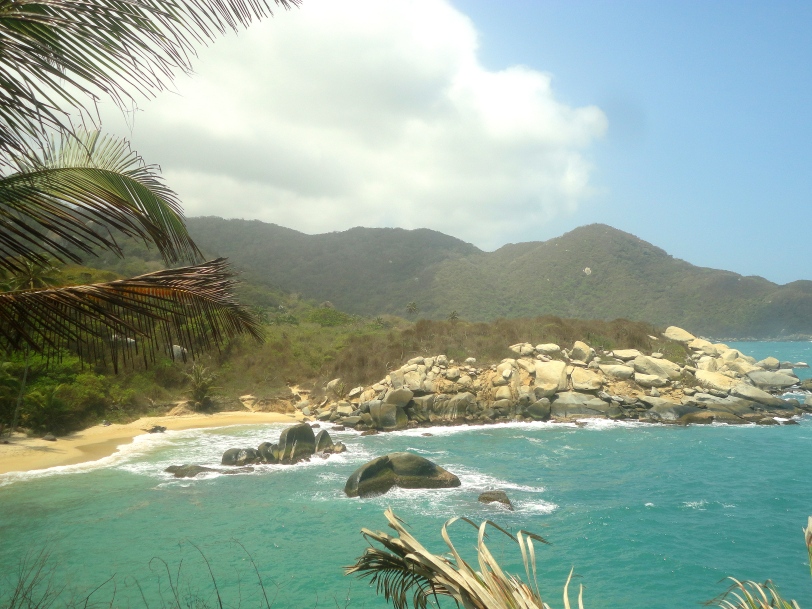 Thatch-roofed huts housed tents and hammocks, where a few people could be seen.  I made my way towards the main wooden building, and passed a sign which named the campground El Paraiso.  Paradise.

I threw my backpack down to the ground in relief as I approached a woman who was rocking in a hammock, the image of relaxation.  Seeing me, she jumped up and immediately was at my service, smiling and welcoming me.  A sleepy red chihuahua, whose name I found out to be Canela, sat nearby, enjoying the sun, the sea breeze, and the relaxing atmosphere as much as her owner had. 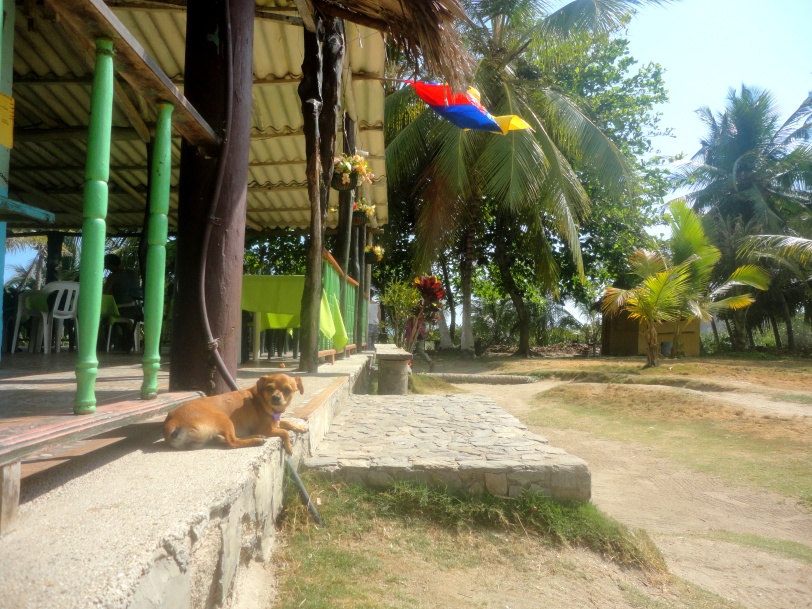 As the Colombian woman continued to help me with my things and with my request for a hammock for a couple nights, I looked around at this beautiful place and smiled.  I really had reached paradise.  That difficult hike through the jungle had been worth it, and for good reason.

And not just about hiking, but about traveling in general that’s exactly how I feel.  The journey is always worth it in the end.

*The entrance fee into Tayrona National Park is 35,000 pesos (~$17.50 USD) for all foreigners.  However, if you are a student and have your ID with you (doesn’t matter from where as long as it’s real!) then you can get an awesome discount as I did, and only have to pay 7,000 pesos ($4.50 USD).  Take advantage of the fact that you’re a student when you can!