A Week in Pink on Campus

I remember overhearing someone I walked by exclaim, “Wow, this school really gets into Valentine’s Day!”

For an entire week, the University of Alabama’s campus was bathed in a rosy glow.  This week also happened to come at the end of January, relatively close to Valentine’s Day, so it is understandable why they might have thought that.

But no – campus was all dressed up in pink that week in preparation for something else.  That Friday, Alabama’s gymnastics team would host a competition dedicated to Breast Cancer Awareness and, essentially, the “Power of Pink”.

So bring on the pink, Alabama.

The Ferg plaza was dotted with pink lights, instead of the usual white, and even the fountain water was turned into Pepto Bismol.

Denny Chimes, the bell tower, was now ringing in the hours with some pink spotlights lighting it up in the night.

Sorority and Fraternity rows also had to join in the fun, of course.  No way were they going to have their houses be left out of the pinkness. 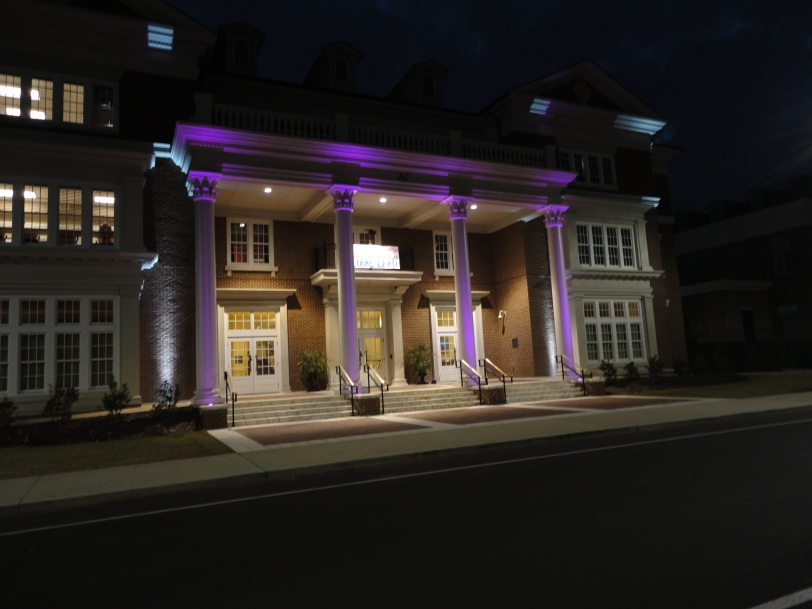 And the week’s festiveness was ended with a bang at the Power of Pink gymnastics competition.  We arrived two and half hours early, all dressed in pink of course, and were able to score amazing front row, floor seats because of it.

We got free t-shirts and pink shakers, got our faces on the Jumbo-tron many, many times, breast cancer survivors were honored and money was raised, and I got to watch my favorite sport.  Therefore, it was a pretty amazing night.

I was sad to watch campus return to its normal colors…but apparently, this happens every year?

Can’t wait until next time.  Keep rocking the pink and supporting the fight against cancer, everybody.