This photo is part of a new series called the “Monday Moment” where on Mondays, I will share a photo usually from the past week or two (although it could be from any time in the past) which highlights an interesting moment or story that isn’t worthy of its own individual post. 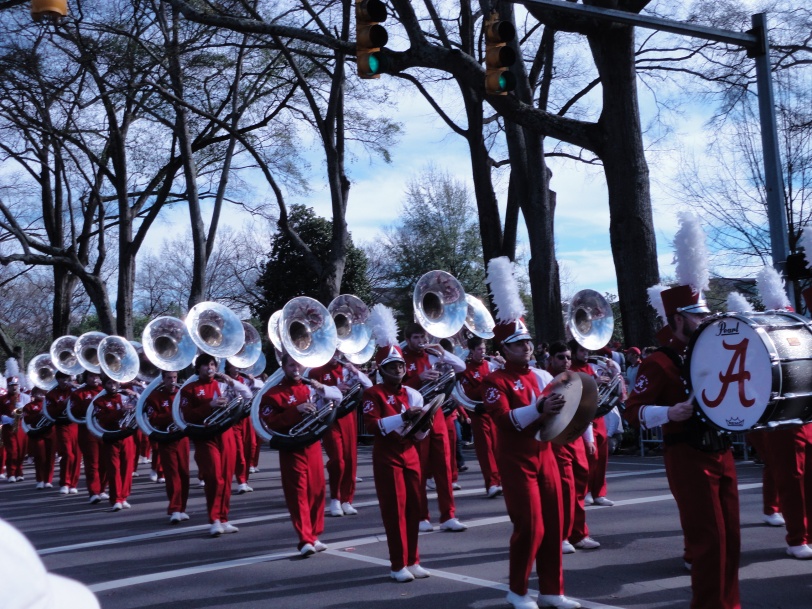 For those of you who may not have known, or who don’t follow American college football, it was my university who won the title of BCS National Champions: the best college football team in the United States.  The University of Alabama’s Crimson Tide football team traveled to Miami, Florida, in early January to play against Notre Dame in this championship game, and they crushed those Irish.  Here in Tuscaloosa, the night we earned ourselves that championship title (the second one in a row!) was filled with insane celebrations and people storming the streets, expressing their excitement.

That night also happened to be the first night I returned to Tuscaloosa after being home for winter break – my bus from the airport arrived back to campus just in time for me to gather with my friends around the TV and watch the game.  Without a doubt, the best “Welcome Back!” night I could have possibly gotten.

The winning team got plenty of informal celebrations in their honor that night and the many nights to come, but last weekend they got an official celebration with their very own parade.  The team’s many football players, and their now very famous coach Nick Saban, all slowly made their way down University Boulevard.  Many people and students, including me, gathered on both sides of the street, waving and shouting to our victorious athletes while snapping photos.

The photo above shows the University of Alabama’s “Million Dollar Band”, as they simultaneously played their instruments and marched down the road, leading the way for all of the cars and floats behind them as well as the football players themselves.