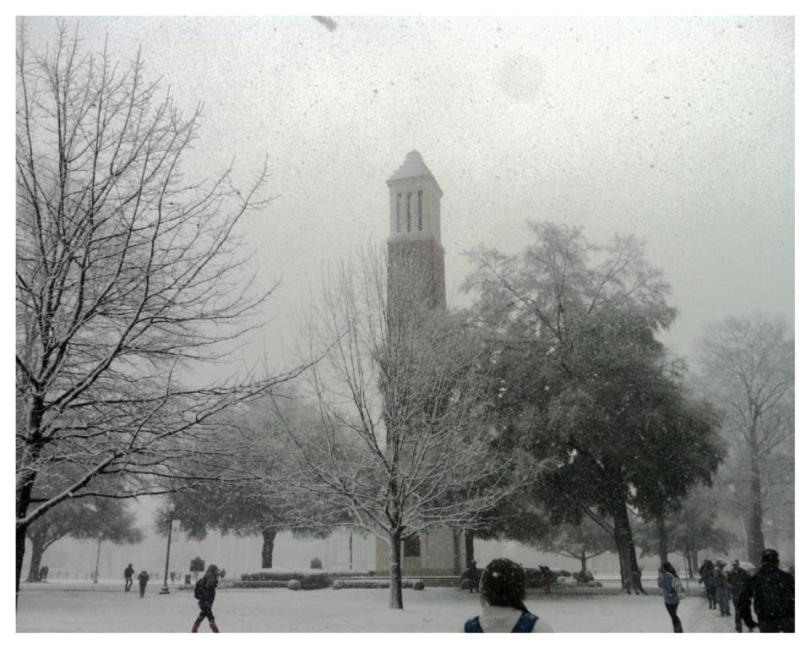 I am starting a new series called “Monday Moment” where almost every Monday, I will post a photo that highlights an interesting moment from the past week.  Kind of like a Friday Photo which many bloggers do, but with my own original spin on it, for many moments which don’t necessarily merit themselves an entire post.  After all, a great story to go along with a photo makes it a whole lot more interesting!

Last week, the town of Tuscaloosa along with much of Alabama got surprised with a snow storm.  If you’re from the Deep South, then you know that getting snow in winter is a rare occurrence, as many of my southern friends have told me.

This surprise storm lasted only a few hours, dousing the University of Alabama with huge, fluffy snowflakes.  The couple inches that stuck to the ground were completely melted just a few hours after the storm had ended – gone just as quickly as they had come.

To a New England girl like me, this was no big deal.  But for many Southerners, it was practically the best day ever.  Many Alabamians, especially those who had lived their life on the Gulf Coast, this was either their first time seeing snow or one of the very few times, and they were ecstatic.  Many of my Saudi Arabian and some Asian friends had also never seen snow before, and had me snap photos of them posing in the wintery weather.

There was even a massive snowball fight which started on the Quad, with hundreds of students pelting each other with snow.  All in all, it was a great day – much more exciting for me than any of the many snow storms I had experienced back home, since I got to watch so many people get excited about it.