A week in November, I traveled to both Georgia and Atlanta for the first time.

And it was here in this huge city that I had two very different experiences; like night and day, basically, except for a few small details. 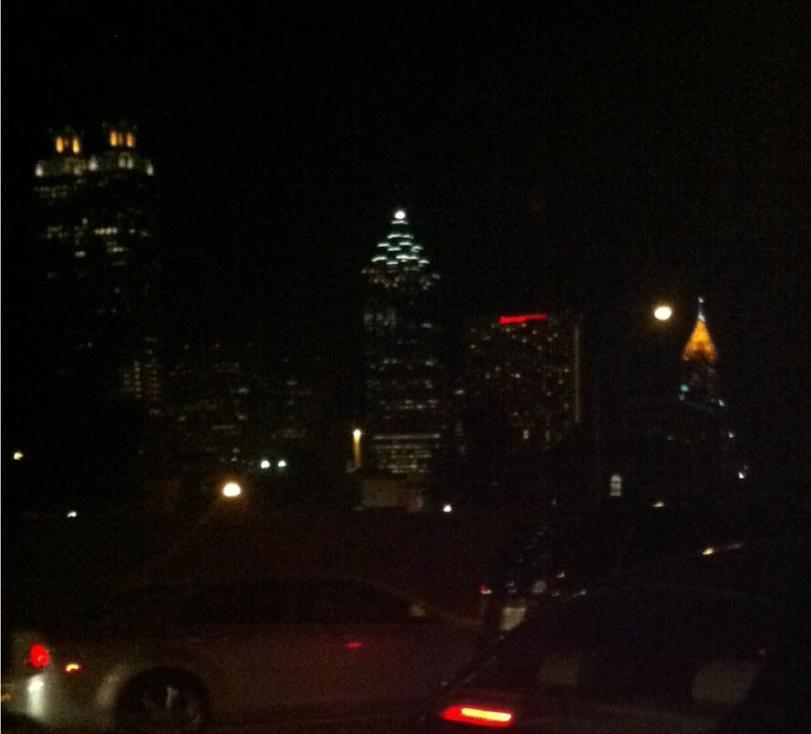 No, I did not go to the Coca Cola World or the Aquarium.  I did not go to any of the sports stadiums, nor was I there for the SEC championship in the Georgia Dome (I wish).  We didn’t even get a chance to visit the Centennial Olympic Park, although we did drive right by it.

All the places my Georgia friends had informed me about, I did not go to.  So no, I was not your typical tourist coming to the city.

First, I came as a fan girl. 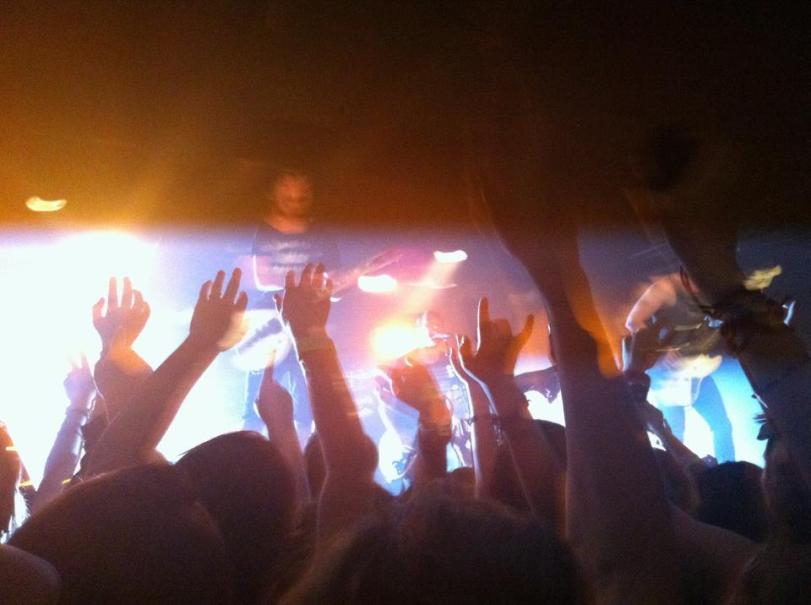 Everybody put your hands in the air and they stay thereee

An All Time Low concert was happening in Atlanta, so three friends and I, all fellow fans of the alternative band, decided we were going to road trip there and back one school night.  I was incredibly excited not only for this concert, where I’d see this awesome band for the first time ever, but also to see the city for the first time.

And after a three hour drive from Tuscaloosa, the vision of Atlanta’s beautiful, glimmering skyline appeared, rising tall in the distance and lighting up the night.

Fast forward to the end of that very night, and the rest of the city still remained a mystery to us.  Besides the concert venue, called The Masquerade, the only place we visited was a McDonald’s and the only actual local we met was a hungry hobo whom we gave our fast food dinners to, in sad recognition of this poor man’s plight. I was left staring at this cluster of twinkling skyscrapers and busy, infamously traffic-ridden streets that was Atlanta as we drove away, wondering at the excitement, secret spots, and quirks that it holds which I had yet to discover.

Let’s be real here – the night’s real attraction was the concert.

Amazing light effects during the All Time Low concert.

People. People Everywhere. I’m squished.  That was, in essence, what I felt like, so much more so than other concerts I’ve been to.  Short little me was in this large crowd of people, helpless as to which direction and how I moved as the audience jumped up and down to the music as a single mass, pushing me every which way, and quite a few times almost making me fall over backwards.

And then of course there were the mosh pits, as though we weren’t already jampacked like sardines beyond the ability to breathe.  Luckily, I discovered this magical ability I possess which allowed me to always appear right in the center of every single mosh pit, and not even realize what was happening until suddenly five large guys had been pushed right into me.  I distinctly remember this hefty blonde girl who had made it her life’s goal to start as many mosh pits as humanly possible within the span of this one night.  I doubt the death glare she received whenever she dared try to push me made a difference with this determination of hers, but it was worth a try.

Don’t get me wrong, though.  The concert was absolutely AWESOME and I had a blast.  A friend had told me All Time Low put on amazing shows, and they were right.  The mosh pits and people-mass were all just part of the experience, and were only the effect of the excitement that the band played up.  They had been preceded by the bands Downtown Fiction, Hit the Lights, and the Summer Set, in order, and with each change of bands the concentrations of people and decibel level of screaming grew, leading up to when Alex Gaskarth, Jack Barakat, and the members of All Time Low took the stage in all their attractiveness and glory.

There was not a moment when I wasn’t screaming in joy, laughing, or singing along to their songs while on the verge of tears simply because it was so amazing (with the exception of my death glares at potential mosh-pit starters and people-pushers).

Everyone was singing the songs in unison, quite a few girls threw their bras onto the stage, and TONS of people crowd-surfed over our heads.  I’m still kicking myself for not joining their ranks, and getting the experience of being lifted over the people-mass while shouting in excitement.  Next time, I say, but also realizing that next time eventually must mean RIGHT NOW.  Onto my bucket list it goes.

After the craziness that was that night, I was back in Tuscaloosa.  However. . .

SURPRISE! I was headed back to Atlanta less than 36 hours after my return, where I would be staying the entire weekend.  Except this time, I wasn’t dressed in a sparkly top and cutoff shorts, ready to jam out to some music with a whole lot of sweaty people.  This time my attire consisted of business jackets and black pants, with a folder full of research and notes in tow.

I was headed to my very first Model United Nations conference. 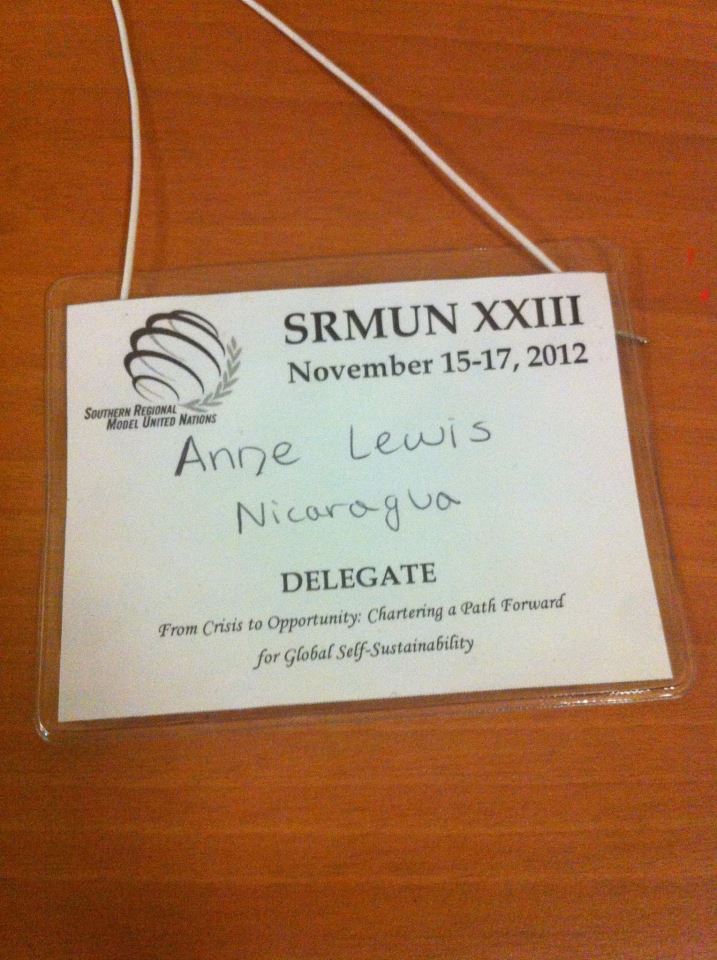 My thoughts on Model UN will merit its own post in due time.  But just like the concert (except in a completely different way, if that makes sense), it was its own, unique experience.

Any hopes of exploring the city this time around were dashed when I discovered upon arrival that we were staying at the Hilton airport hotel, as far away from the city center as possible without actually leaving Atlanta.  And also in a slightly sketchy area.  Nope, no exploring, except to the grouping of restaurants down the street for food.

All the research I had conducted about food price volatility and agricultural methods were put to the test as me and my partner represented Nicaragua in the Food and Agricultural Organization.  Throughout the three days of committee, on Friday lasting for a painstakingly long 9 am to 11 pm with food breaks, speeches were given, overly-aggressive potential future politicians pushed their agendas, and resolutions were passed in this mock convening of a UN organization.

It was definitely a learning experience, and I found it very informative.  However, I’m sorry to say that during these day-long committee sessions I was wracking my brain in boredom quite a few times.  I found myself passing notes in Arabic to others who may or may not have understood it, sending secret messages, and forming alliances with other delegates who were representing Latin American countries.  Those were most definitely my favorite parts of the conference itself.

But the real highlight of this second trip to Atlanta was Saturday night.  Committee was over, the closing ceremonies had passed.  We could all relax and be ourselves again now.

Our University of Alabama delegation ventured into the heart of the city for dinner, where we just happened to stumble upon possibly the most creative, most delicious restaurant ever created in existence.

The restaurant was called Chow Baby! and here, customers would essentially make their own stir fry.  With different rice and noodles, a million vegetables, spices, and sauces to choose from, and your choice of meat type and quantity, you would assemble your own dish however you wanted and then watch it be cooked together right before your eyes.  Amazing and delicious.  I would return in a heartbeat if it weren’t for the question of how to get there.

Watching your stir-fry get cooked right in front of you.  (photo credit smyrnavinings.com)

Two very different experiences in Atlanta, indeed.  However, on the last night, I found the concert and the Model UN conference really weren’t that different after all when a “delegate social” occurred, which to my surprise, was a raging dance party.  The professional, all-about-business people I had been in a conference room with only hours before were now stumbling around drunk or tearing up the dance floor or a combination of both.  Or, in a couple cases, trying their best to dance with me as I did my best to scurry back to my friends.

Highlights of a week in Atlanta:

3 thoughts on “Mosh Pits, Model UN, and Mischief in Atlanta”