Not a High School Student, Not Quite a College Student

Now that I’m in the summer between my high school graduation and my first college semester, this is undoubtedly exactly how I feel.  But I definitely felt this “in-between-ness” the most when I had to go to my orientation at the University of Alabama about a month ago, before I had even graduated.  Let’s jump back to then, because orientation made for a relatively interesting story. 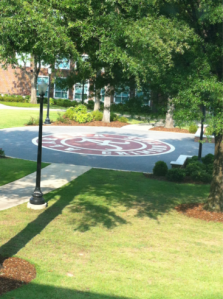 One of the most awesome things about orientation, that I thought at the time, was the fact that I got to skip a day of high school to fly down.  Seriously, any excuse I got to not have to go to school during senior year was cause for some serious excitement.

Driving into Tuscaloosa, Alabama late at night had me absolutely bursting at the seams with this excitement.  I’d been here before, to visit the school last year, and it was very cool to see my future home for the next four years once again, but I was more excited than anything to finally meet my roommates.  I had been talking with all three of them for months, and now I was finally going to meet them in person.

When we arrived at the hotel, I was practically running through the front doors the second the car was put into park.  I began hurriedly searching the lobby for the group of three girls.  Was it them? No that’s a guy…. Hey she looks familiar! Ohhh that person works here, just kidding…

I began to realize that they were nowhere to be found here.  I could feel the bubbling excitement seeping out of me as I plopped down into one of the comfy lobby chairs, and pulled out my phone.

…BUT WAIT! There was a text on my phone from the three of them! They had all gotten here before I did, and had went to go buy some snacks and go to the gas station, and they’d be back any minute!

Before I knew it, the three of them were walking through the doors, and our ‘We’re finally meeting’ screamfest began, complete with jumping up and down and acting ridiculous.

One of the first things I noticed was that I was the shortest one out of all of them.  Gotta love my small size… 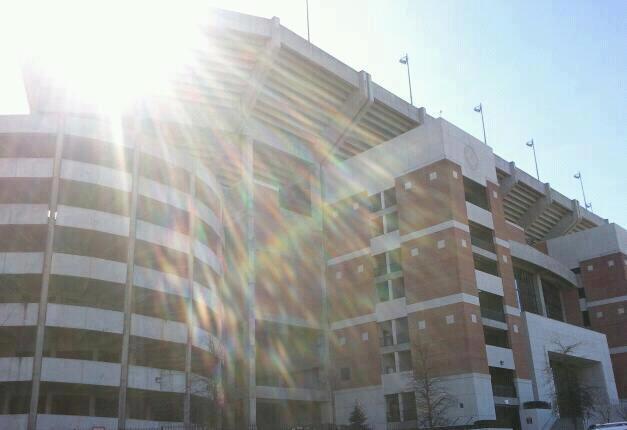 The Bryant Denny Football Stadium. I’m sure I’ll be spending some exciting days here in the future!

And we were off!  After driving around campus that night, amid bouts of hysterical laughter, John Mayer songs, attempts to duplicate the Southern accent which the roommate from Alabama did so perfectly, and also my very first (and delicious) experience with sweet tea, the next day at orientation went by very quickly.  It was a whirlwind of guides, presentations, food, placement exams; all helping us get to know this place a little better before we came to officially call it home come this August.

It was all pretty enjoyable, minus the placement exams, and surprisingly, the extremely stressful task of picking out classes.  It was basically a cutthroat competition of who could snag the best times for classes first, and who could get signed up for a class before it filled.  Except this was all done in relative silence, with only under-the-breath cursing, with no movement except that of the computer mouse at every computer.  I came out of this with a pretty awesome schedule, in my opinion, although it cost me a couple of near mental breakdowns and panic attacks. It’s all good though, because I successfully got signed up for my Arabic class in the end.

The day ended with a trip to a wings restaurant, and some heartfelt goodbyes and “See you in August!”s with my roommates.

And by the next morning, I was back on a plane to New Hampshire.  Great.  I was already mourning my return to high school and praying that the next and last couple weeks of it would go by quickly.  (Which they did!)

But this whole “not quite a college student yet” experience left me with one big impression:

The next four years were going to be awesome, and August could not come soon enough.

One thought on “Not a High School Student, Not Quite a College Student”