Why America is so Inconvenient for Travellers

While staying in the city of Gettysburg, I encountered a problem that made me think about this question, and I now fully realize the answer.

It was on a day, while staying at this small hotel of ours, when my dad took our car to Penn State University to help my older sister start packing up her dorm in preparation for leaving the campus for the last time.  However, because of this, me, my mom, and my two younger sisters were left without a car.  Come lunchtime, we had to find a place to eat, and this became a problem. 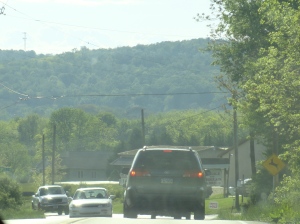 How do you get anywhere without a car in the United States?

Now here’s the catch – we weren’t staying in the center of Gettysburg, or near downtown, where you could walk anywhere easily from your hotel.  We were on the outskirts, surrounded only by other hotels full of tourists.  The only way to get to any nearby place for food was to walk along the main road in search of it.  Naturally, we tried this, but after getting many a weird look from those passing by in cars and feeling kind of strange ourselves, we decided to go back.  We ended up stuck inside our boring hotel room, ordering pizza for delivery, with only the pool and the TV for entertainment.  Some vacation day. But this whole episode got me thinking – thinking about how the United States is most definitely not a good destination for backpackers. I almost started laughing at that last sentence.  “Backpacking the United States” – that would just be impossible.  After travelling to Europe, I know now that the US is seriously lacking in public transport.  There are hardly any public bus or train systems, and forget walking everywhere unless you live in a city.  Same with metro/subway systems; you’ve only got them if you live in a major US city.  But besides that, the only real way to get around is by driving your own car.

When I lived in Spain, I discovered that all of the teenagers could get practically anywhere with their own two feet, as well as utilizing the very efficient metro system the Basque Country had.  Meanwhile, here in New Hampshire, I’m practically imprisoned in my own home, only able to walk around the few streets that encompass my neighborhood, unless of course a friend with a car rescued me, or my parents drove me somewhere.  Freedom came when I got my license and I could drive on my own, but still, this was my only means of escaping the endless feeling of house arrest, except for school of course.

Not only is transportation inconvenient in the US, but lodging is too.  The idea of hostels and guesthouses had been completely unknown to me prior to when I found out about them a few years ago, when interviewing my Spanish teacher for the school newspaper I had written for.  When he was younger, he ran a hostel in Spain with a few of his friends for some event which I can’t remember.

But no, as far as I know a hostel system in this country is non-existent.  Someone please let me know if I am wrong, but if you are a travelling to any destination in the continental US, your choices are ridiculously expensive all-inclusive resorts, expensive hotels, moderately-priced (but still pretty expensive) hotels/inns, or cheapo sketchy motels.  The exception to this is of course those little bed + breakfast places, which you might find in smaller cities and towns.

So there you have it, the US isn’t the most convenient place for real travellers.  It’s fine for all the tourists out there though.  Road Trip? Absolutely.  Resort Vacations? Sure, if you have the money.  Backpacking? Definitely not.  It is expensive here compared to the rest of the world, but I’m sure places in Europe are still much more expensive.

Don’t get me wrong, I love my country, but the almost 18 years I have spent here have shown me it’s not the most convenient place a traveller, and especially a backpacker, could go.