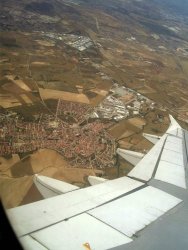 Seeing Spain for the first time from the sky.

The city lights of the Iberian Peninsula – those were what I first saw as I watched from my uncomfortable plane seat, thousands of feet up in the air, as the Atlantic Ocean became the coast of Portugal in the early morning hours.  The cities, like anyone would say, looked like tiny ant colonies, sprinkled with dazzling lights shimmering in the dark landscape.

Now enough with the super eloquent writing describing the amazing views anyone can get from an airplane at night.  All I could feel was one super intense emotion: Excitement.

Remember, this was the first time I had ever been off the continent, and let alone to another country besides the United States.  This was my first real adventure.  The longest plane ride I’d ever been on, and also the first one crossing seas.  The last day of my junior year had been only the day before, and soon I was going to be in a whole new land, and not looking at it from a television screen or online photos.  This was it.

Touchdown in Madrid felt so surreal to me.  I had to constantly remind myself that I was in Spain, and I had to continue to remind myself of this throughout the trip.  I most definitely was not in Kansas anymore (or New Hampshire for that matter), this was España. 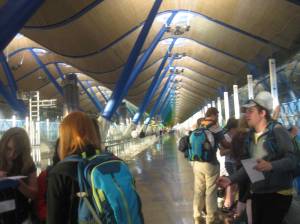 Despite the delay and having to wait another whopping six hours for our connection flight to Bilbao, with basically all twenty two of us passed out on the floor by our terminal, all of the feelings of exhaustion vanished the second my exchange student’s father drove me out of Bilbao’s airport and into fresh air.  Of course, the visual side effects of jet lag did not go away, meaning I still looked like utter crap, but it was like a shot of energy had been injected into me the second I laid my eyes on the countryside.  Green mountains were suddenly rising up all around me, signs along the road were written in both Basque and Spanish: all of this was just another reminder that I was far from home.

The name of the small town in which my host family lived is Barrika, about a 15 minute drive from the center of Bilbao.  My family included my host student, Ainhoa, as well as her younger sister and her parents.  I spoke Spanish with them ALL the time.  The only times I spoke English were when I was with my fellow American students and when my Spanish/Basque father asked me for translations to English.  But I loved it.  I absolutely love learning and speaking new languages, so this was the perfect opportunity to improve my Spanish skills, since I was surrounded by the language and being forced to use it. My host family was also amazing.  I couldn’t have asked for better host parents, and I miss them so much.  I sometimes honestly wish they were my real parents….it’s bad, I know.  But they were so welcoming, friendly, and just very genuinely kind people who were just so happy to share their home, their life, and everything they knew with me – just another random American girl clueless about the rest of the world but so eager to learn about it and experience it.  I couldn’t have asked for more amazing people.

Go ahead – drool all you want.

Another thing about these great people who I got to live with for 10 days – they are also super wealthy.  This picture you are looking at is in fact the house where my host family lived, in which the small downstairs bedroom leading out to the pool was where I called home for these 10 days.  Arriving here from the airport, I was completely astonished.  I mean, I had obviously seen pictures online of Ainhoa with all her friends in her pool, but now I was standing in front of it for real, taking in this amazing sight.  It was absolutely incredible – so modern, so luxurious, I felt like I was living at a resort, except it wasn’t.  One of the most amazing things about this home I thought was the beautiful vista you could see from the back pool area: the deep blue, unsettled ocean stretched out before me, with the mountainous coastline going as far as the eye could see.

While trying to manage taking in all of this awesomeness, as well as unpacking, and while still suffering from my jet lag, I was basically thrown right into the loop.  Ainhoa’s pool party and barbecue kicked off only moments after I had arrived.  I got to be the interesting foreigner, make lots of new Spanish friends, go swimming in the pool, eat some delicious Spanish barbecue, and all while experiencing this gorgeous home and sight.

Best photo of the trip that I got, in my opinion.

I couldn’t wait to find out what the rest of this trip would bring as settled down in my new home.  If one thing was for sure, it was that this was most definitely a good start to the next two weeks.